Now available
on Android and iOS
Play for Free
Join CROSSOUT, the post-apocalyptic MMO Action game! Craft your unique battle machines from dozens of interchangeable parts, ride them directly into combat and destroy your enemies in explosive PvP online battles!
go to the Crossout website
About — Factions — 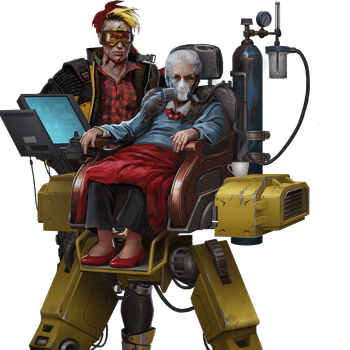 Who hasn't heard of the Mechanics in our time? United idealists who are ready to selflessly come to the rescue, giving a chance for survival to literally everyone. But are their motives so pure?
Those who aren't afraid of the truth know that Mechanics used to inspire fear in everyone around them. One day their power grew so much that it began to frighten people. By uniting, other factions overthrew this dictatorship. The mentor, the former leader of the Mechanics, has officially retired. His post was taken by Ivy, who guided the remnants of the faction along the path of redemption. But not everyone agreed to lay down their arms. There were also those who didn't want to play by someone else's rules. Soon they will return to the Valley again. Their name is the Founders.

She was responsible for feeding the employees in a large plant for the production of special equipment. Because of this, she deftly seized power after the disaster.
For several years, Eva successfully led a close-knit community of factory workers who became a family for each other with the proud name of the Founders. Thanks to her steely character, both people and equipment survived. Then Eva met her Mentor, was inspired by his ideas about the new world and joined him. So there were Mechanics. They made a lot of noise, were defeated and split. Some of them went after Ivy, and the workers from the factory and the dissatisfied ones stayed with Eva, whose health had already been greatly shaken by that time.
The founders laid low, patched their wounds, restored their connections, and returned to the Valley. Eva trusted her Mentor with her family, and he failed her. And now she has a lot of questions for him.